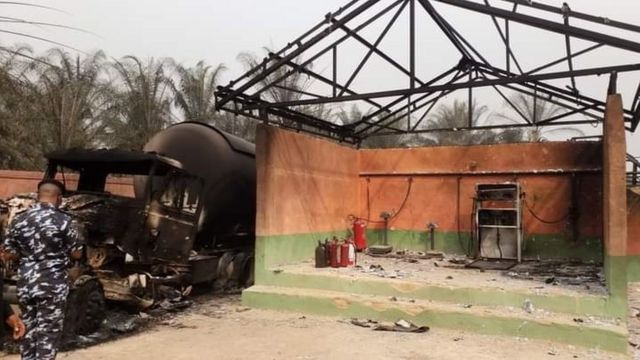 The Department of Petroleum Resources (DPR) has blamed gas explosions and fire accidents in the country on lack of compliance with safety guidelines by retail outlets.

It warned of dire consequences if the trend continued, insisting that gas dealers in the black market were particularly culpable and should be held accountable for the incidents.

Speaking during the zonal annual general meeting of oil and gas stakeholders tagged: Oil And Gas Safe Operations And Compliance: DPR As A Business Enabler in Warri, Delta State, Zonal Controller of DPR, Antai Asuquo, said the dealers’ lack of compliance with safety rules and guidelines had resulted in loss of lives in the sector.

Incidentally, while the DPR was urging dealers in the Warri zone comprising Delta, Edo and Ondo states to imbibe safety standards, a gas plant exploded in Agbor, Delta State at the weekend, killing four persons and injuring two others.

Asuquo disclosed that the DPR recently destroyed a gas facility in Ughelli, Delta State, as owners of the plant were caught selling products directly from trucks and indulging in other dangerous practices.

He pledged that the DPR would increase its surveillance activities, stressing that beyond surveillance; it would encourage members of the public to provide useful information on all illegal activities.

He also blamed the increasing explosions and fuel tanker accidents across the country on human error and lack of compliance to safety guidelines by drivers.

“Following the incidents, we have upgraded our checks on tank construction, we are also trying to register all trucks that lift petroleum products, whether gas or other products at the various depots.

Our next move is to train drivers in collaboration with the Federal Road Safety Corps (FRSC),” he added.

Director and Chief Executive Officer of DPR, Sarki Anwalu, who was represented by Zonal Controller Port Harcourt, Bassey Nkanga, said the theme of the meeting was chosen in line with DPR’s statutory responsibility of ensuing compliance with petroleum laws, regulations and guidelines in the oil and gas industry.

MEANWHILE, the Rivers State Government has shut down a gas station at Rumuodomaya in Obio/Akpor Council following an explosion, which left one person dead and several others injured.

Commissioner for Energy and Natural Resources, Peter Medee, who visited the scene of incident, said preliminary investigations showed that the explosion occurred due to neglect of safety measures.

He disclosed that the safety gadgets were not operational, adding that the action would serve as deterrent to other gas dealers.

It was learnt that some workers were discharging gas when the incident occurred about 8:45p.m. on Saturday, a development that threw residents into panic, as some fled the area out of fear of being caught up in the inferno.