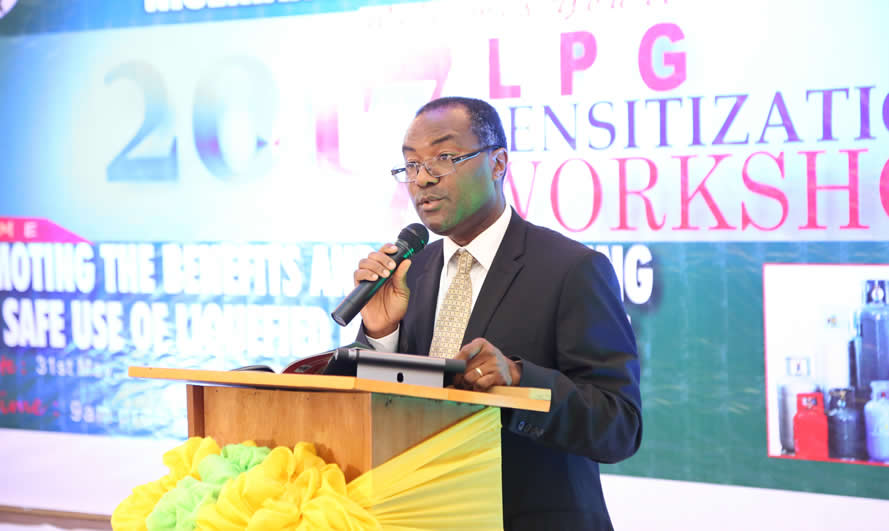 The Owerri Zonal office of the Department of Petroleum Resources on May 31st, 2017 held a workshop that aimed to sensitize stakeholders and the public on the benefits and advantages of using cooking gas as a preferred fuel over traditional sources such as firewood, charcoal and kerosene. The 1-day event was themed “promoting the benefits and encouraging the safe use of LPG” and had 3 presentations that were deemed critical to underlying the importance of effecting a paradigm shift in this sub-sector of the industry.

The Director of Petroleum Resources, Mr. Mordecai Ladan in his keynote address delivered on his behalf by his Senior Technical Assistant, Mr. Abel Nsa, noted that despite Nigeria’s abundant gas deposits estimated at 192 TCF with a further potential of 600 TCF in undiscovered resources, the country’s domestic utilization of the product was grossly inadequate due in part to non-existent gas infrastructure to support supply and distribution, and also because during the evolutionary process of the industry, gas was treated as an unwanted by-product of oil production.

Mr. Ladan however recognized that since the advent of the democratic governance in the 2000s, a combination of the global yearning for increased use of cleaner energy and a dramatic shift in the national mindset has stimulated the desire to grow the country’s gas potentials. Consequently, the Federal Government has put in place various interventions to stimulate gas utilization and monetization. He also noted the various gas policies pursued by succeeding administrations culminating in the current government’s development of an exclusive National Gas Policy separate from the existing Oil Policy for the first time in our history.

The director concluded by identifying Liquefied Petroleum Gas otherwise known as Cooking Gas as essential for the reduction of deforestation and air pollution, promotion of clean energy usage and to facilitate a healthy population growth.

Meanwhile, the zonal operations controller of DPR Owerri, Mr. Morrison Nwokedi, whose office facilitated the workshop in collaboration with the Nigerian Association of LPG Marketers, in underpinning the relevancy of the forum made references to a string of fire incidences in the country triggered by poor usage of LPG, with the tragic incident of the ghastly fire outbreak in a gas plant in Nnewi in 2015 as the most gruesome.

Nwokedi outlined DPR’s efforts particularly that of the Owerri zonal office which covers operations in Anambra, Abia, Enugu, Ebonyi and Imo states to stave off these dangerous operations and prevent a recurrence of such fire incidents. He informed that the workshop was ‘the grand finale and 5th in the series of sensitization workshops on the safe use of LPG in the aforementioned 5 states of the south-east zone’. He used the occasion to encourage marketers and operators to familiarize themselves with the recently approved Guidelines for Standard Operating Procedures (SOP) for LPG Refilling Plant Operations in Nigeria, warning that the strict application of the plant-specific SOP by LPG Operators has become the key prerequisite for the issuance of ‘License to Operate’, a new LPG plant or the renewal of an expired license.

An abstract of one of the key presentations at the forum whose title was inspired by the day’s theme ‘promoting the benefits and encouraging the safe use of LPG’ identified some factors that militate against the use of cooking gas such as; widespread apathy among people especially after witnessing a series of fire incidents, the seeming ‘cheaper’ means as presented by firewood and a general perception of gas as an unsafe fuel. The paper further highlighted the discrepancy in the country’s over 180 million people and the appalling shallow utilization of its abundant gas resources. It also discussed properties of the fuel, its applications, advantages of LPG usage and challenges inhibiting the growth of the LPG industry. Finally, the paper presented by Head of Gas Section, DPR Owerri Zone, Engr. Albert Echibe, concluded by proposing some avenues, which public and private players in the LPG value chain can jointly explore to ensure that the LPG industry in Nigeria grows to its full potential.