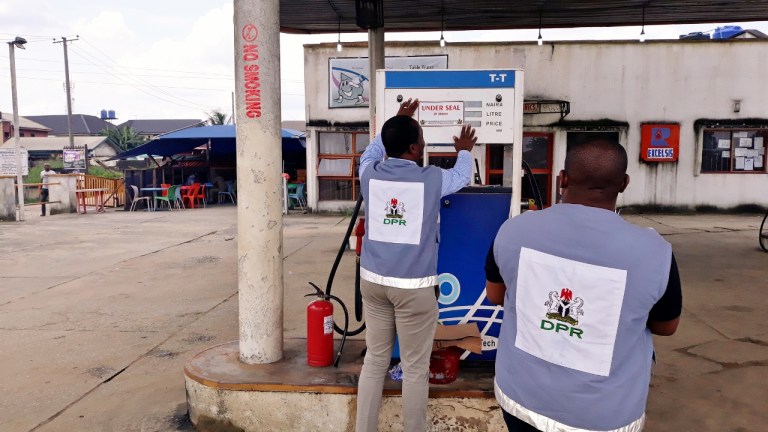 The Department of Petroleum Resources (DPR) says it has sealed eight erring fuel and gas stations in Ondo and Ekiti states over alleged sharp practices and other various offences.

Mr Adewale Oseni, the Operations Controller of DPR, Akure field office, disclosed this to newsmen on Thursday in Akure at the end of a two-day surveillance tour of DPR to filling stations in the two states.

He said the offences bordered on non-approval of gas skids from the agency, operating without a valid license, operating without safety equipment and under-dispensing of the petroleum products to unsuspecting customers. According to him, by such action, the stations concerned had made consumers pay more for smaller quantities.

The operations controller said the agency embarked on inspection and surveillance tour to enforce compliance with the regulations of the agency and protect unsuspecting consumers from sharp practices by petroleum product dealers. Oseni said apart from this, some of the filling stations were also shut for failure to comply with the safety regulations.

The operation controller, who said that it was illegal for filling stations to operate without safety equipment, said the sealed stations would not be allowed to dispense petrol until they pay fines. “The surveillance and monitoring activities were carried out to ensure that the retail outlet stations operate with valid DPR license, not under-dispensing, and to ensure they operate under safe conditions. “In Ondo, we visited four gas plants, three refilling stations and one illegal.

Out of the three refilling plants, two were operating without a valid license and they were sealed. “We also observed some safety issues in another sealed one and we expect them to put in place all those safety equipment missing. “They will have to re-arrange their house before allowed to operate again. “We also visited some retail outlets some of which are doing very fine, and the pump efficiency is very good. “However, some of them did not have sand bucket or fire extinguisher and this serious safety issue. “We don’t expect such petrol stations to continue to operate, so they were sealed and we are expecting that other order to remain in force until they put in place the safety measures and functional safety equipment, they will not be unsealed. “Most importantly, we noticed a station where one of the trucks was discharging without any regard for safety by the dealer.

“They started discharging immediately the truck parked, instead of allowing for some hours for the product to balance before offloading,” he said. Oseni said that a gas station was also sealed in Ikere-Ekiti over failure by its dealer to comply with the petroleum and gas regulations by not obtaining storage and sales license He noted that the station affected had been sealed by DPR in previous operation because the dealer failed to comply with instructions in all the letters issued to it. “When we got there, we found them selling and we said we would not allow that and we sealed it for the second time so that they will adhere to the rules and regulations.

“The affected gas station had been warned earlier, but its dealer did not heed the warning. “What they have done is punishable under the law, so they will be made to bear the full weight of the law. “DPR is the watchdog in the oil and gas industry and we shall continue to be the leading regulator, to ensure that Nigeria oil and gas industry remains safe. “We will also continue to protect the investors and the consumers as well as the general Nigerian populace using petroleum products in the country.