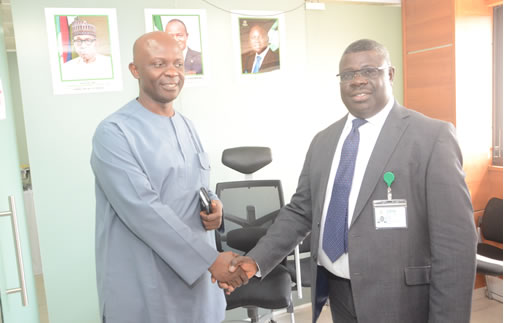 In a recent visit to the Department of Petroleum Resources as part of its oversight responsibilities, the House committee on upstream petroleum led by its Chairman, Honourable Victor Nwokolo, restated its commitment to supporting any legislative effort that would ensure that DPR strengthened its capacity to deliver on its regulatory mandate.

After a detailed presentation by DPR management which included the Director of Petroleum Resources, Mr. Mordecai Ladan, the committee expressed concern over the downturn in exploration activities over the last couple of years, and asked what specifically DPR was doing to encourage more aggressive exploration, especially in the frontier region where our national reserves are optimized.

The Director confirmed that efforts such as consistent reserves addition bonuses to companies, ongoing initiatives by the Federal Government to calm the restiveness in the Niger Delta and the likely rekindling of the oil bidding round in 2017, would all go a long way in boosting exploration activities this year.

Gas flare penalty payments were also confirmed to have been paid by defaulting companies. Assurance was equally given to the committee that vessels with off-spec petroleum products were not allowed into the country, thus reiterating the testing of products prior to discharge.

DPR also assured the honourable legislators that the Department was up to speed on the issue of ensuring the payment of oil royalties, signature bonuses by relevant companies and all other revenue receivables so that Nigeria is not short changed in any form.