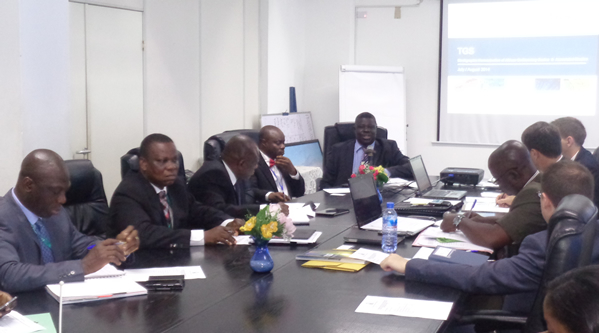 The Department of Petroleum Resources hosted a 4-day meeting from 14-17 July, 2014 to facilitate the project on stratigraphic harmonization of the African sedimentary basin. The project is sponsored by African Petroleum Producers’ Association (APPA) and is being executed under a Memorandum of Understanding with TGS, a United States company based in Houston, Texas.

Specifically, it intends to create a harmonized regional stratigraphic framework for the key producing sedimentary basins onshore and offshore sub-Saharan Africa and normalize the correlation and nomenclatures of the stratigraphic units within the key basins in Africa.

The project is designed to cover the following three zones:

Mr. Don Kotowych, General Manager, TGS, led his company’s delegation to the 4-day meeting in DPR headquarters in Lagos and gave a technical presentation on the company’s ability to execute the project. He noted that similar meetings were holding concurrently in Cameroun and Angola on the project.

The first phase is expected to run for six months, starting from July 2014, and is devoted to gathering data on the E&P status in APPA member-countries. Subsequently, a detailed scope would be drawn up and presented at a later meeting to tie the project into other regions.

DPR promised to cooperate with TGS for a successful execution of the project by providing data through National Data Repository, and the Department was assured that TGS would treat all data made available with utmost confidentiality.

A formal project agreement is expected to be finalized between Nigeria, APPA and TGS by March 2015, after the first phase of the project has been concluded in December, 2014.