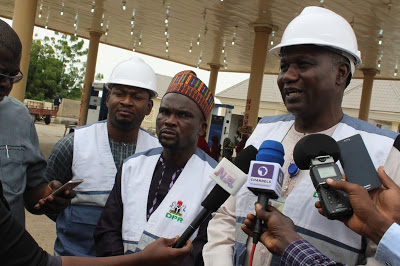 The Department of Petroleum Resources(DPR) Maiduguri Zonal office has embarked on the public education and enlightenment of marketers and the general public on the dangers of handling and usage of petroleum products.

The Zonal Office which covers Borno/Yobe took the campaign to filling stations across the two states where some safety tips and flyers were distributed to the public as well as some pasted at the fuel station to sustain the public awareness campaign on the handling and usage of petroleum products.

The campaign which was more or less peaceful however did not spare some erring fuel stations that were found wanting for various reasons ranging from under-delivery, bad house-keeping and non adherence to safety measures.

Our correspondent observed that most of the fire extiguishers at the filling stations were not working. The DPR asked them to replaced them or face heavy sanctions in the next visit.

In Maiduguri, the Borno State capital where the campaign was conducted on Wednesday, Mala Sheriff filing Station was sealed off while a total nine pumps in four filling stations were also sealed off for dispensing fuel.

In Damaturu, Yobe Statex, Zandan filling Station which applied for renovation and were still caught selling fuel by the team of DPR officials with journalists during the campaign was also sealed off from operations.

The Zonal Comptroller of DRP for Borno and Yobe Idris Ali  Zoka informed that no filling station is allowed to sale while it has applied for renovation and such application is given approval.

“We have been able to sealed one filling station that is supposed to be closed for renovation but they have not closed. They are still selling the product and there is still some substantial product in the filling station and we are coming to evacuate it for safety of the station and for the renovation to take place,” Mr Zoka explained.

Speaking on the campaign, Mr. Zoka said; “We are trying to enlighten the marketers as well as the customers that are coming into the filling station. We have given some posters most filling stations and we are going to find another time to come and have a chat with the filling station owners and the media to give more enlightenment. We are also trying to create some jingles in the traditional languages on the dangers of using and handling petroleum products”.

He also mentioned that a DPR office will soon be coming on stream in Damaturu, Yobe State so as to strengthened the operations of the organization in the state, adding that, “ Yobe is the only state in the northeast that does not have a DPR office and we hope that it be coming up before the end of this year of first quarter of next year”.

Mr. Zoka disclosed that incidences of fire accidents at the filling stations across Borno and Yobe are quite insignificant as even the ones recorded are not devastating.

“For quite sometimes, we have had accident free incidences at the filling stations in Borno/Yobe. We have not seeing quite a dramatic fire cases. Probably in Maiduguri, we have had one or two filling stations but one cannot say it’s devastating. But we are hoping that, the petrol filling station owner will do their best for the safety of their property and the general public,” he explained.

He regretted that the Boko Haram crisis has affected their frequent engagement with marketers but however announced that the DPR still meet with them through their union like the IPMAN.