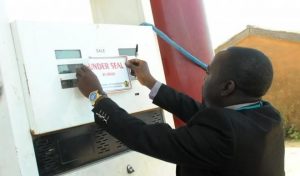 Worried by the recent gas explosion which claimed several lives in Kaduna, the Port Harcourt Zonal Office of the Department of Petroleum Resources (DPR) has sealed seven Liquefied Petroleum Gas (LPG) stations, and shut down 10 filling stations that operate illegally and under-dispensed petroleum products in the state. Speaking to journalists shortly after sealing the illegal LPG outlets, the Port Harcourt DPR Zonal Office Operations Controller, Bassey Nkanga, said the DPR has commenced a total clampdown on illegal operators and dealers of cooking gas across the state.

He said the LPG illegal dealers have been engaged in recent past on the need to adopt legal means and apply safety precautions in their activities but that they have not heeded to the appeals.

He further explained that the department has engaged the LPG plant owners not to sell gas to retailers that do not possess valid licence to avoid ugly incidents such as the recent explosion in Kaduna.