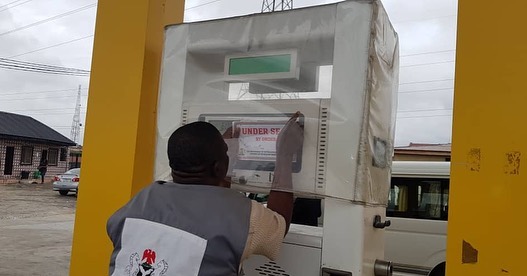 The Department of Petroleum resources as part of its regular surveillance of PFS visited seven (7) filling stations today and sealed one (1) filling station in Surulere axis and Two (2) illegally constructed facilities.

The Head, Retail Outlets Monitoring Lagos Zonal office Mr Akinyemi Atilola said the reasons for sealing one of the stations is that it was operating without licence and in an unsafe environment. The said station was sealed previously but the Marketer broke the seal and has continued to sell products to the public. It is now being sanctioned in accordance with the law.

The other station was sealed for under dispensing of product to the general public. Two (2) pumps out of Three (3) failed the dispense test and as such have been sealed, pending when that is rectified and re-evaluated by the Department.

A prospective petrol station site under construction which has been under seal was also visited to ensure compliance with the seal order issued by DPR. It was sealed because the Authority to Construct (ATC) has expired.

The essence of these exercises is to ensure that the general public is not being cheated through under dispensing of products and assured of prompt attention to complaints. It was equally an opportunity to sensitize the general public on Safe handling of Petroleum products as using info-graphics.