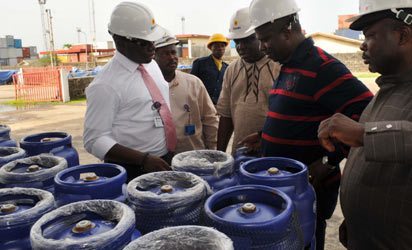 Mr Bassey Nkanga, DPR’s Operations Controller, Port Harcourt Zone, disclosed this in an interview with News Agency of Nigeria (NAN) on Monday on the sideline of the department’s ongoing surveillance on gas plants in Port Harcourt.

NAN reports that the government had in May stopped customers’ ownership of cylinders as well as barred the refilling of gas cylinders by the roadsides and other unauthorized places.

The policy, the government said, would require that the ownership of LPG cylinders rest solely with the dealers and distributors.

According to Nkanga, the department had held several meetings with operators of gas plants and LPG retailers to introduce them to standard minimum requirements acceptable in the industry.

“The new model by the government; decanting (transferring from one gas cylinder to another) is not allowed, trans-filling is also not allowed.

“That is why we are encouraging, enlightening, and engaging them (retailers) to adopt the new methodologies, whereby, somebody would have to drop (empty cylinder) and pick another one with gas. “The era of decanting, transcending and transferring from one cylinder to the other is no longer going to be allowed “So, we have been talking to them (retailers) and they even formed a union to register for the Category D licence.

A lot of them have turned up, and so many are yet to turn up,” he said. Nkanga further said that government was also clamping down on operators of illegal gas plants; those operating without a valid licence and others operating within residential areas. He said most of the outlets lacked basic and standard minimum requirements like fire extinguishers and detectors, water sprinkler, temperature gauge, pressure and volume, among others.

The department, he said, had brought competent personnel to oversee its gas division and ensure that operators function within stipulated guidelines and regulations. “We also had several meetings with various stakeholders in the gas sector.

It is illegal to operate without licence. “This exercise has just started on the gas facilities, and it would be continued. We have a requirement and you must meet the requirement before you are allowed to set up a gas plant,” he said. Nkanga said the government was working hard to ensure the availability of affordable cooking gas to rural areas in the country.

NAN reports that four LPG plants, including, Forte Oil, Sun Gas, Timi Gas Limited and Kayzavia Energy were either sealed for not having a valid permit and operating without the necessary safety precautions.