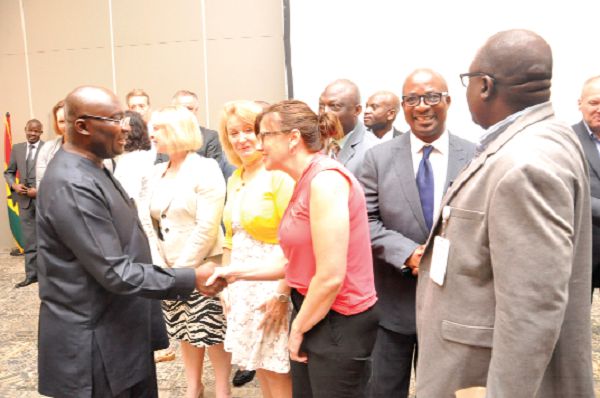 The government is developing a comprehensive and financially sustainable energy economy that will ensure reliable and affordable supply of energy to all homes and industries in the country.

The Vice-President, Dr. Mahamudu Bawumia, who made this known, said one of the anchor pillars to achieve that goal was an accelerated oil and gas exploration development plan and investment-driven initiatives that would promote fairness, transparency and predictability in the country’s upstream petroleum sector.

To that end, he said, the government was championing a number of strategies for a robust institutional framework and legislation in that sector.

The strategies, Dr Bawumia mentioned, included the opening up of new areas for exploration, reviewing relevant legislation to encourage exploration within existing development and production areas, improving efficiency and existing development, as well as production arrangements, and empowering the national oil company, the Ghana National Petroleum Corporation (GNPC), to establish the requisite standby capability for operations.

The Vice-President, who was addressing the opening session of the 11th edition of the International Upstream Forum (IUF) organised by the Petroleum Commission in Accra yesterday, also gave assurance of the government’s readiness to collaborate with the IUF in its quest to realise the objectives for which it was instituted.

The forum, which has brought together representatives of oil and gas institutions, professionals in the petroleum sector and policymakers from about 10 countries, is being hosted for the first time in Ghana and Africa.

The forum is to take stock, share experiences and identify challenges confronting the petroleum sector.

Dr. Bawumia stressed the resolve of the government to develop an efficient and effective regulatory environment for the country’s petroleum industry to become the petroleum hub in the West African sub-region.

The Vice-President said as an emerging oil-producing country, Ghana had to develop the new-found resources at a faster pace.

“We have to focus on the development of the resources and a robust regulatory regime to govern the operations of the industry,” he added.

Within the past 10 years of the oil find, Dr Bawumia said, a lot had been done to develop the various offshore fields, such as the integrated Offshore Cape Three Points, the Jubilee and the TEN fields, including the promulgation of a number of policies, such as the Petroleum Commission Act, 2011 (Act 821), the new Petroleum (Exploration And Production) Act, 2016 (Act 919), the new tax law and the local petroleum regulation, LI 2204, to translate policy goals into actions to ensure overall good governance in the industry.

The Minister of Energy, Mr. John Peter Amewu, stressed Ghana’s readiness to share experiences with its predecessors in the petroleum sector.

He also called for an all-hands-on-deck approach from all stakeholders, including the Petroleum Commission, as Ghana worked towards becoming the energy hub in the subregion.

For his part, the Chief Executive Officer (CEO) of the Petroleum Commission, Mr. Egbert Fabille Jnr, said building strategic alliances and learning from the experiences of other regulators across the globe were part of efforts by the commission to ensure an effective and efficient upstream regulatory environment.

He, therefore, called on regulators to take advantage of the new changes facing the sector and strive to understand how those changes would affect their regimes.