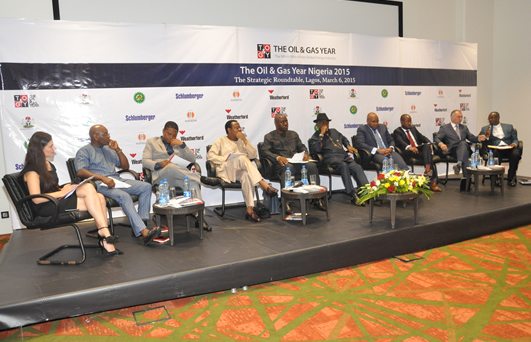 As Nigeria cranks up the turbines in a bid to bolster its power generation needs, gas to power has been identified as a viable area for attracting investments by global business interests. This assertion was made recently in Lagos by Engr. Fred Ohiani, Deputy Director of Engineering & Standards Division of DPR while representing the Director of Petroleum Resources at a ‘Strategic Roundtable’ organized by the Oil & Gas Year, which held on Friday March 6th, 2015 at the Eko Hotel & Suites in Victoria Island.

Ohiani maintained that opportunities abound in the oil & gas sector for the serious investor who must look beyond the present challenges in the Nigerian environment to long term benefits derivable from an industry that is clearly the leader in the region. The deep and untapped gas reserves, the largely untapped deep water frontiers, the prolific oil fields, premium crude variant and favourable and negotiable fiscal regime are all the factors present to encourage investments for long term rewards.

Other speakers present during the roundtable also pointed to favourable indices in the oil & gas sector and recommended Nigeria as a definite destination for investors. Engr. Ernest Nwapa, Executive Secretary of the Nigerian Content Development (Management) Board, encouraged potential investors to ignore what he termed temporary risk factors and rather focus on the enormous opportunities available in Nigeria’s primary sector. He stated that terrorism; flailing oil prices and a slow economy were all global factors present in other countries and should not deter interests in Nigeria. He was optimistic that they are very temporary issues that Government was addressing and that they would fade away.

He informed that over $5billion has entered the Nigerian economy by way of investments over the last 4years. These investments have been made strategically in various areas such as the establishment of ship building / vessel fitting yards, manufacturing of oil field equipment etc. Mr. Nwapa also cited companies like Ladol, Total, General Electric, Petrolog and Saipem as making significant investments in various areas as testimony to ongoing faith reposed in the long term viability of the Nigerian oil & gas sector of the economy.

Also present at the event were, Chief Tunde Afolabi, Chairman of Amni International, Eke U. Eke of Schlumberger, Femi D. Thomas of Weatherford and Dr. Tony Chukwueke of Tenoil and Transcorp, who was also former Director of Petroleum Resources, among others.

The Oil & Gas Year Strategic Roundtable is a forum for the who’s who in the Global Energy Industry. This was the 3rd of such an event that was previously held in 2012 and 2013.